Glaucoma progression slows as medication adherence increases, according to a study published in Journal of Glaucoma.

Researchers conducted a retrospective analysis of electronic health records and pharmacy data of 6343 patients (54% women) with primary open-angle glaucoma (OAG) or pseudoexfoliation glaucoma between 2001 and 2011. All participants  had topical ocular hypotensive prescriptions filled within 90 days of initial diagnosis, and drug benefit coverage with membership for at least 1 year before diagnosis and 2 years after diagnosis.

Patients with very severe disease at baseline had the highest levels of medication adherence.

Researchers found that for every 10% increase in adherence to medications, there was a 0.036 dB worsening in mean deviation at a given point in time, and a 0.006 dB  reduction in mean deviation progression per year. For patients with moderate disease severity at baseline, glaucoma was likely to progress (3 dB threshold) after an average of 8.7 years if the patient had consistent 20% adherence, and 1 year later if the patient had constant 80% adherence (P =.006). Beginning the medication regimen earlier and high adherence rates were linked with slower mean deviation progression.

“[The study] demonstrated that treated patients with glaucoma who were more adherent showed less deterioration in visual function over time and presumably had less need for additional interventions,” according to investigators.  “On the basis of the variations in trajectory of disease progression, this study supports the clinical imperative of improving patient adherence to glaucoma medication. With higher adherence, it is more likely that glaucoma progression will be delayed, and that the disease will have a less detrimental impact on the patient’s quality of life.”

Limitations of the study included its retrospective nature, a lack of controlling for other risk factors for glaucomatous visual field progression, and the inability of pharmacy refill data to classify whether patients used medications at appropriate times or properly instilled them.

Disclosure: Some study authors declared affiliations with biotech, pharmaceutical, and/or device companies. This research was supported by Allergan, an AbbVie company. Please see the original reference for a full list of authors’ disclosures.

Glaucoma Other Glaucoma Primary Open-angle Glaucoma
Next post in Glaucoma 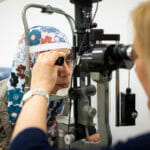