An annual, cyclical pattern showing a relationship between intraocular pressure (IOP) and time of year has been identified, according to a study in the Journal of Glaucoma.

Researchers reviewed a possible seasonal IOP pattern in participants using a total of 3 datasets. Dataset A analyzed information from 3401 participants who received an examination between 2011 and 2018. The relationship between IOP and time of year was assessed using regression analysis. Dataset B was collected from examinations between 1999 and 2002 (n=3261). Dataset C consisted of all first visits during 2012 and 2017 (n=69,858).

Analysis of dataset A revealed that mean peak IOP occurred in December/January (15.7±3.7/15.7±3.8 mm Hg) and was lowest in September (14.5±3.1 mm Hg). An annual, downward IOP trend was detected, with a November-to-October reordering (P <.0001). This trend was confirmed through analysis of dataset B (P <.001). Analysis of datasets A and B supported a 12-month IOP cycle for right/left eyes (P =.01/P =.005), and stronger evidence for annual periodicity was provided by dataset C (P <.0001). A repeating pattern emerged in which IOP trended downward around April, and upward around October. A trough was noted between the months of May and September.

Study limitations include a retrospective analysis, single center design and no variation in time of day of IOP measurements. 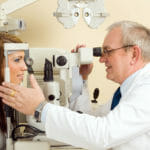