Smartphone technology has become more accessible to the visually-impaired and blind in recent years due to the incorporation of sound, haptic, and gesture features in place of visual interaction. However, a need for increased awareness still exists outside of the vision rehabilitation field, according to findings published in Clinical Ophthalmology.

Researchers reviewed 30 articles related to smartphone access for the visually-impaired and blind population to highlight accessible features and apps appropriate for use as assistive technologies. Touch screen accessibility, in particular, has enabled users with visual impairments to access electronic information and communicate more efficiently.

Smartphone interactions are transforming “from a traditional visual interface to a truly visual free interaction,” due to these technological advancements and the variety of ways to use them. Accessible smartphone technology has contributed to optimizing daily activities, independent functioning, movement, social inclusion, and education. Additionally, the universal design, which consists of built-in features, is unlikely to generate social stigma or negative reactions toward those utilizing them.

The study advocates for increased awareness and training among teachers and caregivers of individuals who are visually-impaired and blind, especially those of developing nations. Ultimately, most users are able to train themselves once they learn that the technology exists.

“Developers are continuously producing more innovative applications for visual impairment, which indicates the need for having a training guideline on the use of smartphones,” the researchers explain. “Formal training for special educator[s] or teachers would be helpful in improving access and smartphone usage among students with visual impairment.”

Study limitations include the lack of formal treatment and control groups. 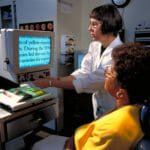