Children with strabismus and amblyopia (SA) appear to have functional connectivity abnormalities in various brain regions, particularly in areas with visual, cognitive, and emotion-related pathways, according to research published in BMC Ophthalmology.

Investigators report that understanding these connectivity abnormalities is crucial because “detailing such connectivity aberrations is useful in exploring the pathophysiology of SA and providing useful information for future clinical management.” 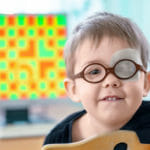