Risk factors for abnormal blinking in both boys and girls include increased video display viewing time (VDTt) and decreased ocular protection index (OPI), according to findings published in BMC Ophthalmology.

There were no significant differences in age between the 2 groups, but there was a significant difference in TF stability (P <.05). Investigators found VDTt and OPI to be important risk factors for abnormal blinking, with cutoff values of 1.75 hours and 1.014 respectively in boys, and 1.25 hours and 1.770 respectively in girls, according to binary logistic analysis. They also noted average lipid layer thickness was an important protective factor for children using VDT for long periods, with a cutoff value of 58.5 nm in boys and 53.5 nm in girls.

The study also identified poorer meibomian gland function in boys with an abnormal blinking rate, which occurs due to the need to increase TF layer thickness to prevent further water loss.

“Since one of the most important risk factors for abnormal blinking is the use of VDT, we infer that long-term use of VDT is also related to the function of the meibomian gland,” according to the researchers.

Study limitations include a small sample size, a relatively short observation period, and possible confounding due to air quality factors. 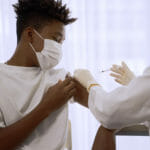