A patient’s pupil diameter can change following the insertion of an implantable collamer lens (ICL), according to a report published in Eye and Vision. Researchers arrived at their conclusion using anterior segment optical coherence tomography (AS-OCT) to measure pupil diameter before and after surgery.

After exposing patients to varying brightness levels, the research team found that patients who received an ICL with a central port  had a wider pupil diameter. A positive correlation was also shown to exist between pupil diameter and postoperative vault. The prospective, observational case series involved 65 eyes from 65 patients. The participants’ mean preoperative age was 32±7 years and they had a mean spherical equivalent of -9.46±3/38 D. Two eyes were implanted with 12.1 mm ICLs, 20 received 12.6 mm ICLs, and 3 received 13.7 mm ICLs. The AS-OCT device was employed for imaging and dynamic pupillometry under varying light conditions both before and 4 months after surgery.

Investigators found that the scotopic pupil was larger than the optic zone in 60% of eyes, and the average central vault readings were 412±177 μm under maximum miosis and 506±190 μm under maximum mydriasis. They discovered a positive correlation between vault and differences in pupil diameter under all light conditions (P <.05).

“Measurement techniques based on dynamic AS-OCT enable us to determine scotopic pupil diameter reliably and precisely in the iris plane before and after pIOL [phakic intraocular lens] surgery,”  according to the researchers. “Further studies using this promising technology in larger series might provide more accurate data about pupil size changes after ICL surgery to better predict postoperative symptoms, and thus better counsel our patients.”

In terms of current practice, the researchers suggest that their findings buoy the addition of pupil measurement in the preoperative assessment of those who receive pIOL implantation via simple, noninvasive, and dynamic AS-OCT devices.

Limitations of the study include manual-image acquisition and the brevity of adaptation to dark environments by examined participants. Maximum miosis could also have been determined using a brighter light. 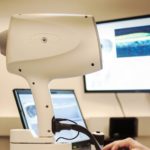 Electroretinogram Can Monitor Glaucomatous Changes in Eyes With High Myopia