Taller people are more likely to have eyes with biometric parameters associated with myopia, according to a new study in Clinical and Experimental Optometry. Young adults subjects between 1.75 m and 1.95 m tended to have longer eyes, deeper anterior chambers, flatter corneas, higher axial length-corneal radius ratio and more negative refraction than other subjects. It also found that young people with a higher body mass index (BMI) are more hyperopic.

A total of 5657 students were included in the study. From September 2016 to June 2017, their cycloplegic refraction and corneal curvature radius (CR) were measured using an autorefractor, and their ocular parameters were recorded. Each participant’s height, weight and BMI was recorded during their annual, standardized physical examinations.

After adjusting for age, gender, weight, parental myopia and time outdoors and spent on near work, each centimeter of height increase was linked with more negative refraction as – 0.023 D, a 0.032 mm increase in axial lengths, a 0.003 mm increase in anterior chamber depths, a 0.008 mm increase in CR.

Although several population-based and school-based studies have looked at links between body stature, refraction and biometry parameters, most of them have primarily included children or adults over 40. This study focused on subjects between 16 to 26 years old.

Researchers suggest that the differences in stature may partially explain the variation in refraction and ocular biometry. 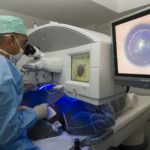