At-home visual acuity tests may provide clinicians with information similar to that obtained from in-office visits, according to research published in the Journal of the American Association for Pediatric Ophthalmology and Strabismus.

Researchers conducted a study of 130 eyes of 65 children assigned to 1 of 2 groups. Group 1 consisted of individuals aged 3 to <7 years (n=34), and group 2 contained children aged 7 to 12 years (n=31). Group 1 was assessed via Amblyopia Treatment Study HOTV (ATS-HOTV) protocols, while group 2 utilized the Electronic-Early Treatment of Diabetic Retinopathy Study (E-ETDRS) protocol. Among all participants, 46% had normal binocular visual acuity, 51% had amblyopia in one or both eyes, and 3% had another cause for decreased visual acuity.

An analysis of group 2 also revealed similar agreement between in-office and at-home findings. Visual acuity was considered abnormal in 22 of the 62 eyes (35%) tested in-office, compared with 21 eyes (34%) tested at home. These tests also differed by 0.1 logMAR or less for 59 of 62 eyes (95%). The mean differences between in-office and at-home visual acuity results were constant across a range of visual acuities (slope=-0.05).

“At-home visual acuity testing may provide the information needed to continue care via telemedicine consultation when it might otherwise have been discontinued or delayed,” according to the investigators. “Additionally, at-home testing may help in enrolling and retaining more diverse participants in clinical trials, who otherwise would not participate due to the requirement for multiple office visits.” 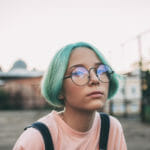