Ischemia and neurodegeneration are the main disease pathways associated with changes to visual acuity (VA) during the early stages of diabetic retinopathy (DR). However, the primary mechanism varies among patients, according to findings published in Eye and Vision.

Researchers investigated the effects of retinal ischemia, neurodegeneration, and subclinical edema on best-corrected visual acuity (BCVA) in the early stages of DR. The study utilized optical coherence tomography angiography (OCT-A) to evaluate ischemia according to its microvascular parameters, and neurodegeneration and subclinical edema were identified by OCT by the intraretinal layer thickness. The study included 132 eyes of 89 patients with nonproliferative DR. Eye classifications included 66.7% with normal BCVA (n=88, Snellen equivalent >20/20) and 33.3% with decreased BCVA (n=44, Snellen equivalent <20/20). Outcome measures included the prevalence of ischemia, neurodegeneration, and subclinical edema in both groups, and correlations were determined between BCVA and these pathological pathways.

The study found a significantly lower vessel density in the deep retinal capillary plexus (DRCP, P <.05) and thickness of ganglion cell layer plus inner plexiform layer (GCL-IPL, P <.05) in eyes with decreased BCVA compared with eyes with normal BCVA. Age, DRCP, vessel density, and GCL-IPL thickness (all P <.044) were predictors of BCVA in the final multiple regression predictive model. In eyes with decreased BCVA, the proportions of ischemia and neurodegeneration were significantly higher than in eyes with normal BCVA (P =.001 and P =.004, respectively).

The researchers explain that, while some eyes with DR manifested only ischemia, neurodegeneration, or subclinical edema, a portion were seen to have overlapping phenotypes.

The study notes that “these changes suggest that the predominant mechanism of visual impairment may be different in different patients,” highlighting the fact that indicators based on OCT and OCT-A may help in the identification of threatening factors and the optimization of treatment methods.

Study limitations include a lack of clarity around observed relationships between ischemia, neurodegeneration and the decrease of BCVA due to the study’s cross-sectional nature and limited sample size. 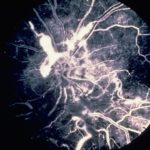